Posted on September 23, 2011 by alisoninfrance 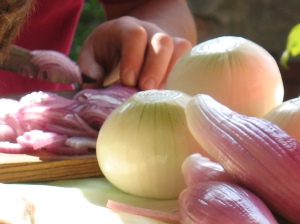 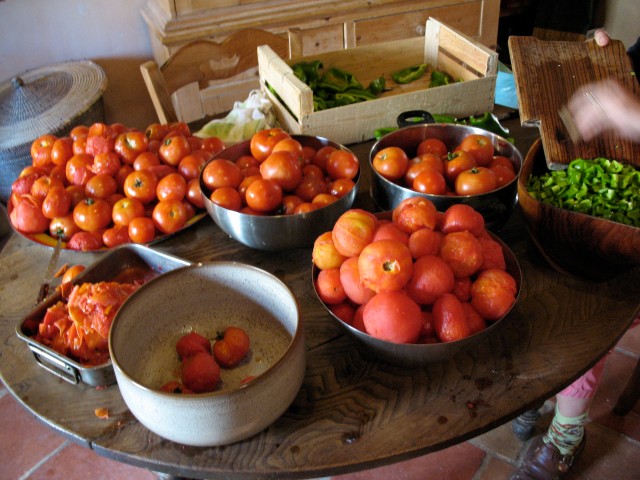 Two days ago I was wondering how I would possibly manage to carry my two twenty three kilogram bags on and off le TGV in Paris and Avignon, and today I was gathering ripe figs with my dear friend Madeleine in un verger abandoné.  Oui, je suis arrivée!   It was late afternoon, the air warm and sweet. She knows all the trees whose owners have long since forgotten them; les figues, les pommes, les cerises, les abricots, les pruneaux…sun kissed and delightful. Yesterday, as to celebrate our four year friendship, we went to le marché in Uzes in the Place des Herbes and bought les tomates, les oignons, les poivrons, et de l’ail and spent the afternoon slicing and mincing and peeling to prepare le coulis des tomates.  First, she boiled water to peel or éplucher les tomates, while I sliced the enormous onions, their fine skins crumbling from my hands.  Next, the crescents of onions, transparent as slivers of a mid-day moon, and rich green peppers fell into the great pot on the gas burner steaming into a limp mélange followed by the fat white cloves of garlic minced paper thin.  Last, herbes de provence were added for flavor and we were ready to fill les bocaux, to seal them, and preserve them.  I remembered with fondness the entire day we spent in 2007 preparing four times the quantity of coulis; thirty-two jars, with the eager help of Jonathan and Daniel, and Robin and Art.  The fresh taste of summer brightened many a dark winter evening thanks to many hands, many couteaux, and much laughter while creating “the fruits of our labor.”

This entry was posted in Nature. Bookmark the permalink.